Almar Co is a distribution company of leading brands like Rode, Universal Audio, Steinberg, Focal, Solid State Logic, DPA Microphones, WARM Audio, Austrian Audio and others for more than 20 years. Main supplier of equipment for the majority of Bulgarian studios, from professional to consumer with a dealer network covering the whole country. Almar Co is a team of musicians, producers and consultants in audio and musical equipment with a long list of projects and customers in their portfolio. We have been a choice of a supplier for local music and media celebrities, as well as some of the major production and recording studios. Being the first company to specialise in computer music production, we de facto have established this type of market in Bulgaria and have constantly been developing and educating it ever since. First collaborations with educational institutions date back to 1998, when the Steinberg Training Center in Sofia University has been established – the first one in the area. For many years we are receiving a recognition by our customers and dealers and being considered an obvious choice to turn to.

The logo of Almar has been hand drawn by Alex Markov and represents the duality of the audio. It has been a recognizable emblem in the country and all over the world for almost quarter a century.

Alexander Markov founder and CEO of the company, is a musician, audio engineer, producer, pioneer in digital, surround and ambisonic audio making the first 3D recordings of Bulgarian choirs during the 90`s in collaboration with Paul Wiffen.

He has worked with some of the most popular Bulgarian Producers such as Emil Kolarov and with the Grammy Award winner Rumen Bojadjiev as co-producer and engineer since 1990. Owner and host of the studio in the National Philhamonic hall: “The Bulgaria Hall” untill 2015. 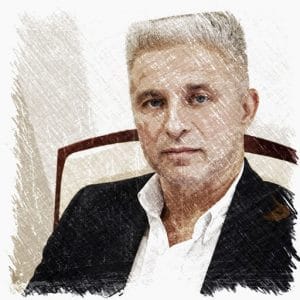